Last week we had a two-day Visual Facilitation Workshop in our office. 15 people from our department learned how to draw people, faces, icons and structure a page.

On the first day we started by drawing some lines, circles and other easy stuff to get rid of our fear of the blank page, then we did some funny things with squares, learned how to do containers, visualise a process with arrows that don’t look like you panicked when drawing them and in the end visualised a scrum process with everything we learned that day. 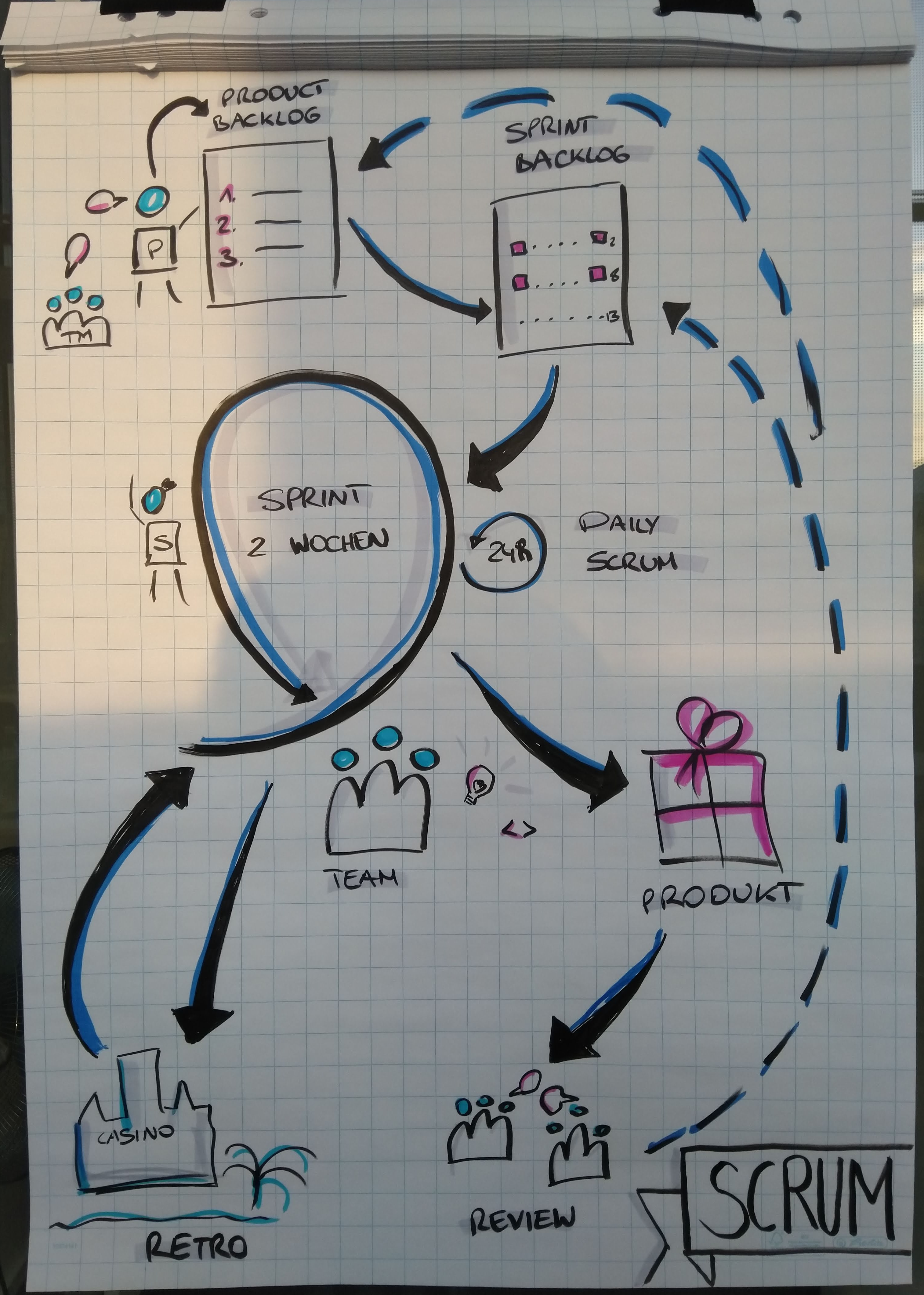 I got rid of my fear of drawing shadows (just take a grey pen and put a line somewhere, doesn’t matter where, it makes the drawing look better) and that arrows that grow bigger look much nicer. The first day was the “basics” part of the workshop.

The second day started with a fun exercise on how to improve visualisations by using the 6-3-5 method: 6 people put down 3 different ideas on how to visualise a word and then this paper gets moved to the next person who tries to improve on these ideas. Our group had words like Conflict, Problem, Use and Rating, the other group had words from our domain context (that don’t translate into English). I started with Purpose/Use (“Zweck/Nutzen”) which I had exactly one idea for: a hammer and a nail (when all you have is a hammer, everything looks like a nail) and then I spent the rest of my time googling icons for these words and not understanding them. But it was fun anyway.

Then we did a session on drawing faces because someone wanted to use this for drawing personas. There was a lot of “women have long hair, men have large noses, asian noses look like this, …” which made me feel super uncomfortable, so I just left for a while. I’m not keen on using personas anyway (there might be a blog post coming about personas and DDD).

Before lunch we did another fun session: Draw an object in as many ways as possible. The facilitator’s suggestion was to do things like “How would this object look like if it was frightened or if it belonged to Napoleon?”. I chose a pencil and actually did Napoleon’s pencil which looked quite fun and then I had the idea to do a word play: A pencil that runs away (“stiften gehen”). After that, my creative energy was drained. 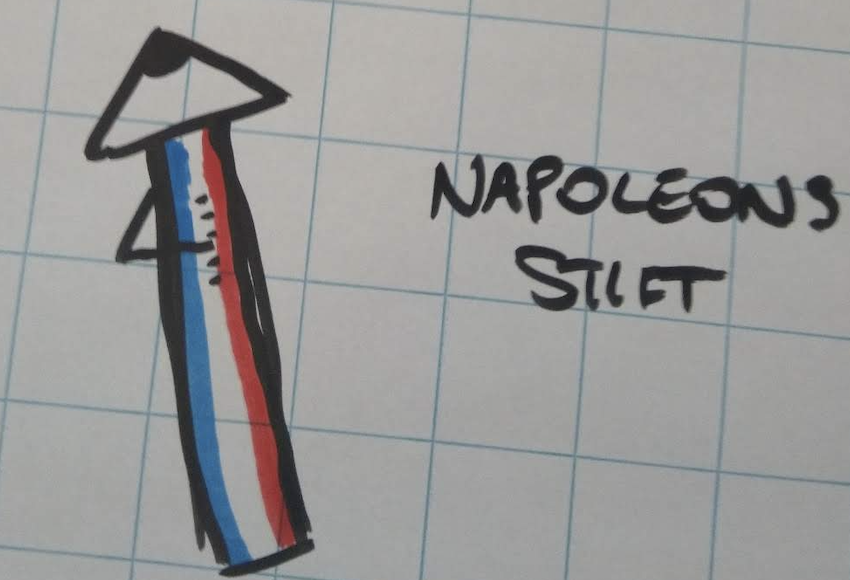 In the afternoon, we first visualised a TED talk on how to package a speech to different audiences. Our task was to first sketch it roughly on small paper while listening, then move to the flipchart while listening for a second time and then spending some more minutes on perfecting it. The facilitator had good instructions on how to structure the drawing process: start with a key visual first, then the most important quotes/aspects, containers, connectors and colour later. I actually forgot looking at that list while drawing but I think these were good practices to do in general.

I did realise that I don’t do well with planning and then drawing, though. I was much happier with my impromptu sketchnotes at KanDDDinsky than with this exercise or my attempts at visualising content from books. I also realised (much later) how tired I must have been doing this because I just copied the speaker’s gendered language without even realising. 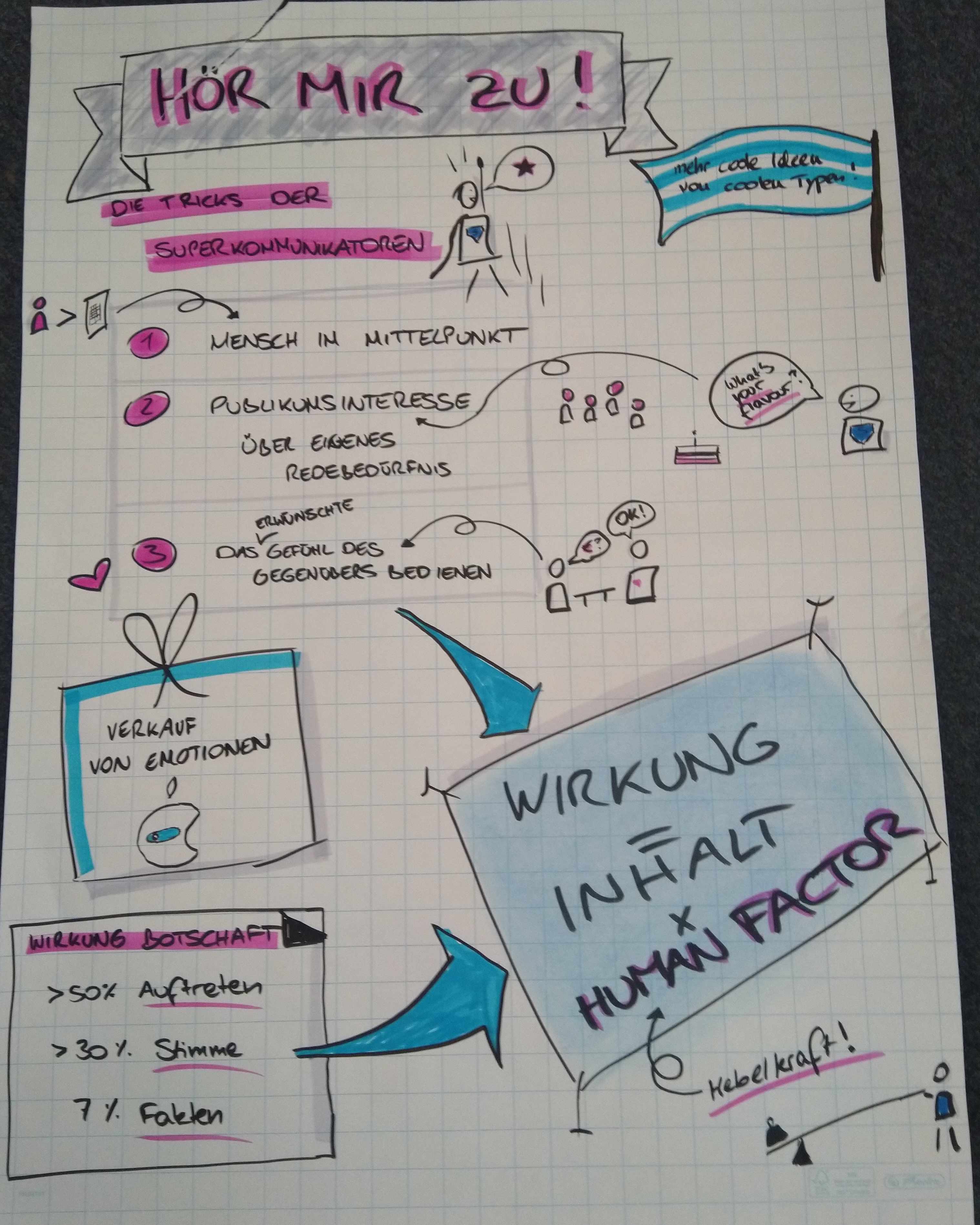 The last session was to draw a giant poster out of 15 flipcharts with the phrase “We never lose, we either win or learn” across those 15 papers and everyone added success stories and learnings to their individual poster. The result looked super cool.

All in all, I was a bit meh about this workshop. I thought that we would do more on how to use visualisations to facilitate meetings and do other ad-hoc visualisations in a work context. I think this workshop was great for people who had never done anything like this before, but for me there was not that much new compared to a sketchnoting workshop I had done a few years ago. But the facilitator had some great resources for learning more that we will buy for our office. And hey, I learned how to do shadows!