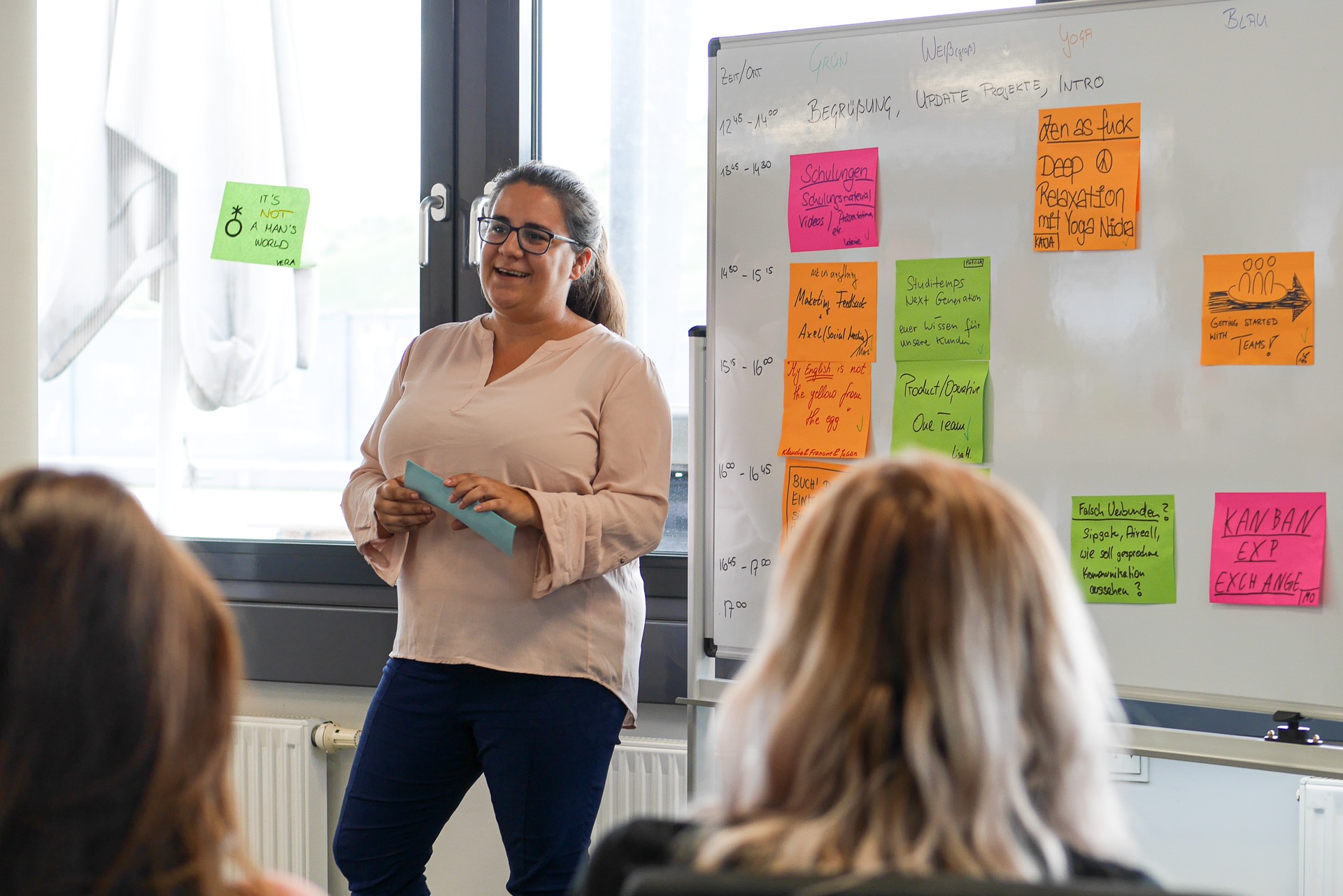 I moderated our Open Space in Stuttgart yesterday and it went quite well. It was my first time doing this and I was a bit nervous but not too much because I felt well prepared. I had a quick talk over coffee with one of our Scrum Masters who usually moderates our Open Spaces where we went through what I need to do: Explain how we do an Open Space at Studitemps (there’s a motto, session hosts should write down their results on a prepared canvas, Managing Directors will each choose a project to sponsor, project updates at next Open Space), get Project Owners from last Open Space to do an update on their projects, explain how an Open Space works in general (principles, rules, bumblebees and so on), be available for questions during sessions, close the space down after letting participants share what they want to share and explaining steps until next Open Space.

Since I the last Open Space that I had participated in was less than 2 weeks ago, most of it was still fresh in my head. I just always think it’s a bit difficult to find a good order of explaining things without saying “I’ll get to this later” too much. So I sat down the evening before to write some moderator cards with a structure of things I need to think about. I also looked up the pricinples again to make sure I phrase them well and to have them written down in case I forget one in the heat of the moment. I ended up forgetting to talk about Project Owner responsibilites before sending people off to sessions, but I said it later and all the rest went quite smoothly.

I even thought of preparing a prop session post-it to explain what should be on it and how to present a session, and I wanted it to be something people might share a quick laugh about to start into it in a positive way. So since I’m known for pushing gender-neutral language and have already had some slightly heated conversations with some of the people I knew would be there as well, I said: “Hey, I’m Vera and I want us to be bold in not caring about the readability argument anymore and instead using language that does not only address mail students, let’s find bold ways to use language that’s inclusive for all genders, so I’m inviting you to my session “It’s NOT a man’s world” at 14:45 in meeting room green.” Then I put the post-it on the board, went to the side and explained that this is how a session should be presented. And then I went back to the board, put the post-it away and said “Don’t worry, no one needs to faint in panic, this was just a prop, I’m not going to do a session on this”, which got some laughs AND some “Oh no, why not?” which was quite nice as well. And today I saw our facebook post about our Open Space and the post-it that I stuck to the window next to the board features rather prominently in two of the 8 pictures posted. Haha!

The Open Space itself went great. We were a small group, but people had great session ideas and there were quite a lot of sessions for the amount of people. I spent most of the time near the board when I wasn’t going around collection flip chart papers for our project gallery wall and I had some very interesting butterfly sessions while just hanging around with someone who did not attend a session. One topic will definitely become a session at our next Open Space. At the Closing and afterwards, some people said they had never experienced and Open Space as being over so quickly, so I guess others had good sessions as well.

We then spent the evening on the rooftop terrace with lots of beer and lots of talking about our work and other things and some compliments on my moderation. And I have just published our internal website with information and resources on mindfulness, which was my project from the last Open Space, so I think I can file the past 2 days under “Successful”.